More than 300 islands located in the middle of the South Pacific between Australia and Hawaii, make up the Fiji Islands.

With their white sand, plam tree covered beaches & colourful coral reefs with clear lagunes, they simply are paradise!
A paradise that I’ve always wanted to visit and finally did in the beginning of 2017!

After my first backpacking stop in New Zealand, I headed into my next adventure: 10 days island hopping in Fiji!

I was blown away by the colour of the water, the welcoming warmth of the locals and the small, palm tree covered islands.

After I landed in Nadi, the first island called!

South Sea Island is the tiniest island I have ever visited. It only took 5 minutes to walk around the entire island!

I spent 2 full days on this beautiful island. I met a few other amazing backpackers here and we spent the days with pure relaxation: swimming, sunbathing, reading books, making bonfires in the night and playing guitar. It was exactly how I imagined the Fijis to be!

I loved our bonfires in the night! The locals played guitar and were singing, while millions of stars were shining in the sky above us.

On our second day we did a sailing trip including drinks & food. We had so much fun just sailing around the islands, meeting other travelers, snorkeling and swimming in the bluest waters.
Besides that, we stopped at “Monuriki Island”, which is one of the movie spots in the film “Cast Away” with Tom Hanks.

The famous movie spot from “Cast Away”. Here we went snorkeling and getting lots of Vitamin D on the beach.

After that, we headed back to South Sea Island where we enjoyed our last evening before heading to the next island!

The ferry that I booked the island hopping with, is called “Yasawa Flyer” and brought us to the different islands.

Then we finally arrived at “Wayalailai Island”.
This island is very different than South Sea Island- it’s bigger and there is a huge volcano mountain in the background!

These were the huts that we slept in.

There are hibiscus flowers everywhere on the islands! The locals like to use them as hair decoration and I always wore one too! 😀

Here I spent two days relaxing on the beach with other travelers.

There definetely are no bad views in Fiji!

These hammocks were just heaven. I spent hours reading my book, enjoying the views and life!

One of my favourite things that I did during my time on the Fiji islands: swimming with sharks!

It was such a stunning feeling to see the first shark so close to me!
If you are asking yourself if this is dangerous- no it’s not. The sharks are reef sharks and very friendly to humans. They even come close & you can touch them.

Kava is a traditional ceremony drink made of a native plant that has a relaxing, mind clearing effect on the body.

The locals invited us to take part in the ceremony and we travelers sat together with them in a circle, giving around a coconut shell filled with Kava.
Before you have a sip, you have to clap once, drink one sip, clap again, say: “Bula!” and give back the coconut shell to the locals and clap another three times.
That’s the tradition!

After a full day of adventures we enjoyed amazing sunsets.

And another cozy bonfire under a sky full of stars!

Off to the next island!

White Sandy Beach was the island that I liked the least. The water was way too hot, the beach was dirty and the food was really bad…

That’s why I decided to only stay 1 night instead of 2, which was the best decision I could make because I saved one more day for a very special place. (Want to know which one? Read until the end. :D)

The beach itself looks beautiful on this picture, but there was trash in the water, on the beach and there was no electricity at all and we had to eat our food, which tasted awful, in the dark. Our bedroom was smelly and we decided to leave this island one day earlier than planned.

After one night at White Sandy Beach, we left to Nabua Lodge.

Still completely fascinated by the colour of the water!

Finally arrived at Nabua Lodge. I fell in love with this island from the very first minute. It was absolutely the right decision to come here earlier!

Most beautiful beach views. If this isn’t paradise, then I don’t know which place is!

Fresh coconuts from the beach.

On our second day on my favourite island, we went for a day trip: cave diving. It costed me a little bit of courage to do cave diving but in the end it was so worth it!
On our way to the caves I enjoyed the turquoise water to the fullest.

We also visited the “Blue Lagoon”, famous for its clear and crystal blue waters- definetely not promised too much!

After our last day at “Nabua Lodge”, we headed back to Port Denarau in Nadi. Nadi is the city on the main island of Fiji, where all the flights are arriving/departing.

But before leaving the Fiji Islands, I really wanted to go to a very special place in Fiji that I heard about: Cloud 9.

Cloud 9 is a small, 2 level floating bar in the middle of the Pacific Ocean. The spots are very limited per day and you have to be lucky to still get a ticket on time.

Arriving in the hostel in Nadi, where I would spend another 2 nights before leaving, I directly booked a ticket for Cloud 9 & got one for the next day!!!

Some of the travellers that I met along the journey joined me & we spent one day living life on a floating bar in the South Pacific.

The experience was STUNNING!

It takes about 30 minutes to get to Cloud 9 from Port Denarau.
There really is nothing around the bar, but the bluest water you will ever see!
It’s unreal…

There is no filter on these pictures! This really is the natural colour of the water…
From the top you could see various colourful fish because the water is so clear.

You can jump from the second level into the water, have a swim, snorkel, enjoy a cocktail with that amazing view, eat pizza, listen and dance to tropical vibes from the top djs and really experience one day in paradise.

The tickets cost 104 USD for one day (6 hours).
This includes return boat transfers from Port Denarau and a $60 bar tab.

You don’t need to bring anything to the bar, except for your card, towels and swim stuff.

That was my Fiji adventure! What do you think about Fiji? Is this paradise for you? Would you like to come here one day? Leave your thoughts below in the comments! 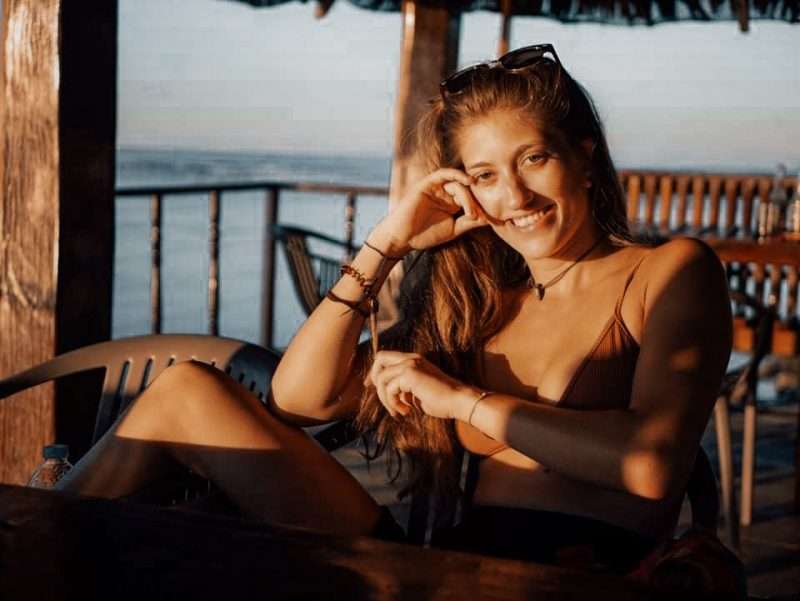 Hey there, thanks for stopping by! I'm a 25 year old travelgirl from Germany that left home right after highschool & is living around the world ever since! Volunteering, studying and working abroad has enabled me to explore our beautiful planet and myself over the past 5 years. Hopefully I can inspire you with my journey to start your own adventure! Happy exploring, Anna xx

Book your next stay